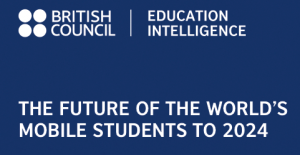 The British Council recently released a report titled, ” The future of the world’s mobile students to 2024.” The PIE News has a handy breakdown of the 45-page document, which predicts the total number of students studying abroad rising from just over 3 million in 2011 to more than 3.8 million in 2024.

This growth will likely be mirrored in the market for English proficiency testing, since, according to the report, the US will remain the top destination for students studying outside their home country. An IIE spokesman points out that with more than 4000 institutions of higher learning, the US can simply accommodate more students than the UK or Australia, which also ranked highly on the list of destinations.

Within a decade, the report predicts, China and India will account for about a third of the world’s outbound international student population. Countries such as Pakistan, Indonesia, and Turkey–all of which are home to iTEP test centers–will also contribute greater numbers. China will become a top host destination as well, the report says.

Scan the QR code to subscribe iTEP news on WeChat