Evince Ahouandjinou, one of the newest iTEP partners, runs the Freedom Language Center (FREELANCE, for short) in Benin, Africa with a combination of passion and ingenuity.  The center targets both students and professionals for language learning and testing in English, German, Spanish and Chinese, as well as native languages to the Benin and Togo geographic areas.

Ahouandjinou founded the Freedom Language Center in the country of Benin on March 24, 2014 and now acts as the CEO as well as a language teacher.  The center provides services to the countries of Benin, Burkina Faso, and Togo, and Ahouandjinou plans on opening a second center located in Togo in the near future.  The center also assists students in other African countries where iTEP partnerships don’t currently exist.

FREELANCE sought partnership with iTEP due to a few factors:  the competitive cost, the incredibly fast turnaround time for English language testing results and the acceptance of the tests by American universities.

“Benin has many language teaching centers, but FREELANCE is one of only three testing centers in the country,” Ahouandjinou said.  “We teach American English here, rather than British English, so the iTEP exams were a good choice.  Additionally, many other tests on the market require registration weeks or days in advance.  I liked the fact that I could request an English language proficiency test from iTEP in only 24 hours, and I would receive the results very quickly.”

The Freedom Language Center provides language courses for secondary students, many who complete a full day at their local school before coming to FREELANCE for language courses.  Additionally, many business professionals who need to learn other languages attend FREELANCE.

“Many professionals come to us when they’ve received a promotion and now need additional language skills, or they’ve received a job in an international capacity and need to expand their languages,” Ahouandjinou said.  “Students seek our services because they want to study at American or Canadian universities.”

The iTEP and FREELANCE partnership for English testing is a new one – the contract was only signed in July – but Ahouandjinou is excited to provide the iTEP Academics, Slate, and Certificate products.

A native of Benin, Ahouandjinou was inspired by his father, who spoke seven languages.  It was always a challenge for me to learn more, he said.  With degrees in international relations and diplomacy from a national university, Ahouandjinou first learned English and German through his advanced studies.  He attended a language school for a year before being asked by his teacher to become an assistant at the school.

“This man is like a dad to me,” Ahouandjinou said.  “I stayed with him for three years under his mentorship and became a teacher.  In 2014, I started my own center because I wanted to implement some unique ideas when it came to teaching languages.”

Those ideas include really connecting with the students by what matters to them, including popular songs.  Instead of just grammar lessons, Ahouandjinou makes sure to teach language and conversation that students can really absorb.

“The students tell me their favorite songs, and I’ll print out the lyrics.  We’ll then translate the lyrics, and this really stays with them,” he said. 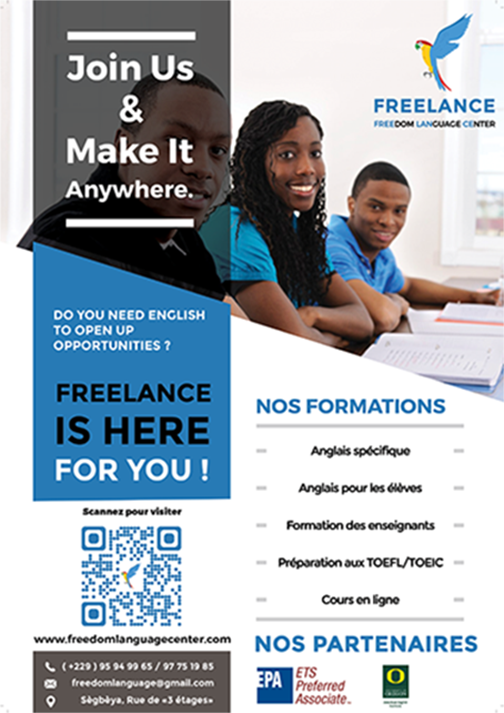 “We play music while we’re speaking, so the students can learn to focus on the language and not the background noise,” he said.  “If you’re shopping in a market or talking on the street, it won’t be silent.  I want the students to learn how to listen and speak in a language when the world is happening around them.”

As his mentor helped him, Ahouandjinou strives to be a role model for his students, and also an occasional employer.  Various students who excel in class might get a job working part-time for the center to help Ahouandjinou when needed.

Ahouandjinou recently met with a representative from the US Embassy in his country, to present the option of iTEP tests as a tool for the Embassy.  The meeting went well, and Ahouandjinou is looking forward to favorable partnership between Freedom Language Center, the embassy, and iTEP.

To continue to help students in Africa, Ahouandjinou plans to work with iTEP and their partner universities in the United States and Canada to provide information on scholarships for students.  “Many students here are willing to do any and all work needed to obtain a scholarship to a Canadian or American university.  I’m hopeful that we can find more scholarships for our students to apply for.”

The new location in Togo was planned for 2020, but budget constraints and border closures due to COVID-19 have stalled implementation.  The Freedom Language Center will expand to Togo once it’s safe, and investment partners are found for the new center.

High school students around the world wishing to study in the United States as a J-1 Exchange student now have a new comprehensive English language skills exam available to assess the incoming student’s grammar, reading listening, and speaking skills. 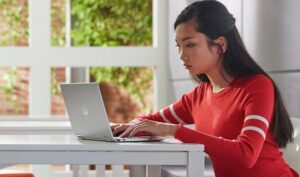 Applying to universities is a daunting task. Proving your English language proficiency adds to the already stressful process. At iTEP, not only are we here