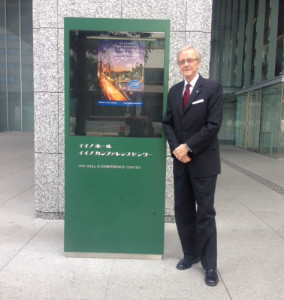 The Japan Times ran an article the next day summarizing Perry’s talk, which focused on how language education in Japan could be improved to produce students with greater real-world language skills.

Update 4/10/14: This story has been picked up by more Japanese media outlets.

Below is a transcript of Perry’s presentation.

English language instruction in Japan is a disaster, an embarrassment in spite of all the promises, all the training, all the teaching, all the new curriculum, all the new methodologies, and all the research. To solve this problem, consideration is being given to offering English language instruction in the 3rd grade instead. In other words, the solution to the problem is to increase the hours now being spent on a failed program as if additional hours will make everything better. Interesting concept.

Second language learning in the U.S. is no better, but no one really cares. In Japan, people really do care, students really do care, business men really do care. And, I might add, the future of many businesses in Japan are dependent on the English language to sell their goods or to negotiate contracts. If a Japanese businessman wishes to negotiate a contract with a business man in Saudi Arabia, the negotiations will be conducted in English. This is not necessarily fair, but it is a fact.

My first real experience with Japanese students was in 1968 when my English language school hosted a group of 87 college age students from Japan. They had arrived in Los Angeles to begin 4 weeks of English language training which included the sights and sounds of Los Angeles. As they deplaned, one of the group’s leaders walked up to me and introduced himself in perfect English with a perfect accent. After a brief exchange, I asked him where he had learned without a trace of a Japanese accent. He told me he had learned on his own as a youngster practicing at every opportunity with American soldiers stationed in Japan.

Remember, this is in 1968 when there were few trained EFL teachers anywhere in the world. And, the text materials were certainly not nearly as researched as the ones we use today.

How did this gentleman, Stanley Yamamoto, who became my lifelong friend, ever learn to speak, understand, write and read English so fluently during a period of time we might consider to be the “dark ages” of language learning?

Why was Stanley able to accomplish this nearly impossible task of learning English with so little formal instruction, while so many Japanese today fail to do so after hours and hours of training from trained teachers using the latest in curriculum and technology?

During my years in English language education and during my many wonderful trips to Japan, I have met many Japanese who are fluent in English. Maybe not quite as fluent as Stanley, but fluent.

In 1970 there was a student named Kyoko Imai who enrolled in my school from Japan. She was 18 years old and wanted to learn English in order to go to university in the US. Kyoko studied for about 7 months or 800 hours, learned English well, proceeded to UCLA, graduated and returned to Japan.

In the year 2005, Kyoko’s son came to the US to learn English in order to go to graduate school in the US. Her son Shin, studied English in an English language school for some 7 months or 800 hours, gained admission to UC Berkeley, graduated and returned home.

It is not at all unusual for a student from Japan to require between 700 to 900 hours of instruction in a US English language school prior to being admitted to an American university. This is the same number of hours it took for students like Kyoko in 1970 to study English in the US prior to going to a US college.

Since 1970, Japan has placed greater and greater emphasis on learning English. Teachers are better trained today, the curriculum is better, there are more hours being devoted to English instruction today than there was in 1970.

I have raised many questions and have not yet provided any answers. Maybe you are thinking to yourselves that this speaker just has no answers—-only questions.

My first question raised was how could Stanley Yamamoto and many other Japanese I have become friends with through the years, learn English so well while most of their fellow countrymen have not. Answer: I do not know. Maybe “language” intelligence. Maybe motivation. I really do not know.

Until just a few years ago, most international English language tests for assessing proficiency in the language tested only the passive skills. For example, from the time of TOEFL’s introduction in 1964 to 2005, neither speaking nor writing was included as components of the test. This was one of the reasons for my interest in developing iTEP–an English language assessment exam that tests all language skills.

IELTS was the first test to cover all skills and it was introduced in the 1990’s. So at the time of its introduction, users of TOEFL readily adopted IELTS recognizing that it provided more information on language proficiency than the TOEFL up to that time. Even the TOEIC exam, which was introduced in Japan several decades ago for businesses, is typically offered in its core form, testing only passive language skills.

To summarize international English language testing history, until very recently most such testing has covered only the passive language skills. And, since that is what the tests tested, that is what the students have been prepared for by teachers supported by the curriculum. As a Japanese English language teacher, why would you take time teaching students to speak English or write English if those skills are not going to be tested by the system. When the system begins to test active language skills, then the teachers and curriculum will support those goals. Teachers will not teach what is not tested.

Learning a second language is really not that difficult under the right circumstances. Based on my experience with tens of thousands of students, I have my own personal formula which I would like to share with you.

A. A teacher who knows English. (Language camps for teachers)
B. A teacher who is excited about teaching English
C. A student who is motivated or who can be motivated
D. A program of study concentrated over a relatively short period of time
E. Opportunities to practice
F. An effective method of assessing progress

Scan the QR code to subscribe iTEP news on WeChat