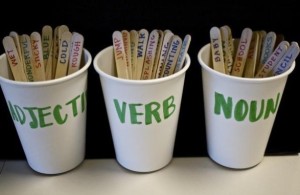 The following is an excerpt from the Official iTEP Preparation Guide.

“Parts of speech” are the basic types of words that English contains. Most grammar books say that there are eight parts of speech: nouns, verbs, adjectives, adverbs, pronouns, conjunctions, prepositions and interjections. We will add one more type: articles.

It is important to be able to recognize and identify the different types of words in English, so that you can understand grammar explanations and use the right word form in the right place. Here is a brief explanation of what the parts of speech are:

Verb: A verb is a word which describes an action (doing something) or a state (being something). (Examples: walk, talk, think, believe, live, like, want)

Adjective: An adjective is a word that describes a noun. It tells you something about the noun. (Examples: big, yellow, thin, amazing, beautiful, quick, important)

Adverb: An adverb is a word which usually describes a verb. It tells you how something is done. It may also tell you when or where something happened. (Examples: slowly, intelligently, well, yesterday, tomorrow, here, everywhere)

Pronoun: A pronoun is used instead of a noun, to avoid repeating the noun. (Examples: I, you, he, she, it, we, they)

Conjunction: A conjunction joins two words, phrases or sentences together. (Examples: but, so, and, because, or)

Preposition: A preposition usually comes before a noun, pronoun or noun phrase. It joins the noun to some other part of the sentence. (Examples: on, in, by, with, under, through, at)

Interjection: An interjection is an unusual kind of word, because it often stands alone. Interjections are words which express emotion or surprise, and they are usually followed by exclamation marks. (Examples: Ouch!, Hello!, Hurray!, Oh no!, Ha!)

Article: An article is used to introduce a noun. (Examples: the, a, an)